Public safety is a quality-of-life issue which I have made one of my top priorities. With rising crime rates being one of the

toughest challenges facing urban communities today, it is my pleasure to report that the City of East Orange has experienced

the highest reduction in crime among cities of similar size in the last 10 years than any other city in the entire nation.

At a nearly 80% reduction is crime, and with more than 30% less crime per capita than neighboring municipalities, the

statistics are astronomical. Our crime rate has not been this low in almost 50 years. In the first half of 2014, there was a

our total reduction in shooting incidents since 2003 to an astounding 88%. These ground-breaking achievements were

have a significant effect on crime levels.

We’ve all heard the “word on the streets.” People who plan to commit crimes in East Orange are often warned by their

peers to do their dirt elsewhere or risk getting caught. That, my fellow residents, is a reputation of which we can all be

proud. Despite these massive decreases in crime, we are still affected by a public perception that East Orange is not safe.

I understand the negative impact that this has on our local economy, and I am working diligently to turn it around.

Now is the time to create a genuine sense of community — a place where you, your families, and everyone else who

As your Mayor, I will continue to take a hard stance on crime and support our East Orange Police Department’s efforts to

restore an overall sense of safety and well-being in every corner of our City.

There's more. You can read the entire message HERE. Mark Twain made this quote famous: "There are three kinds of lies: lies, damned lies and statistics." Two of the types of lies are above in the mayor's message. The statistics to prove it are below. 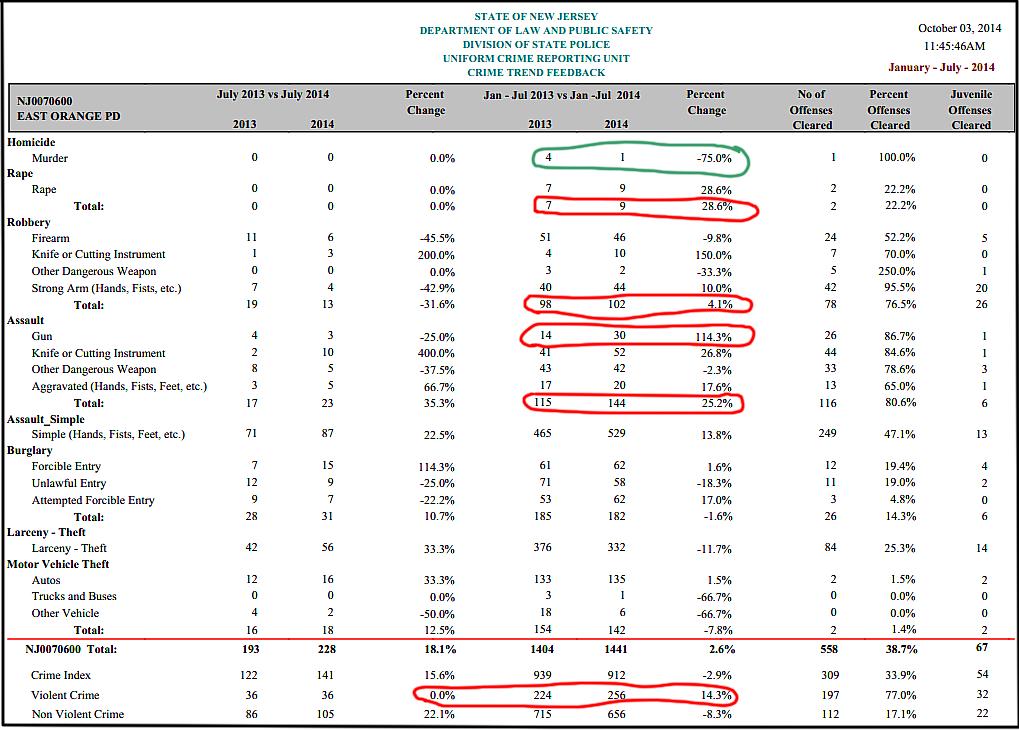 The mayor's "nearly 80% reduction" is circled in green. I don't know where he gets his 5% crime reduction figure. The numbers I have circled in red tell a different story. Perhaps the mayor had his eyes shut when he looked at the actual state police crime trend statistics.

The mayor just wants you to "feel safe." You can do that when your eyes are shut. I prefer to keep my eyes open when I'm traveling around East Orange. I would rather "be safe" than "feel safe."

Back to The East Orange True News