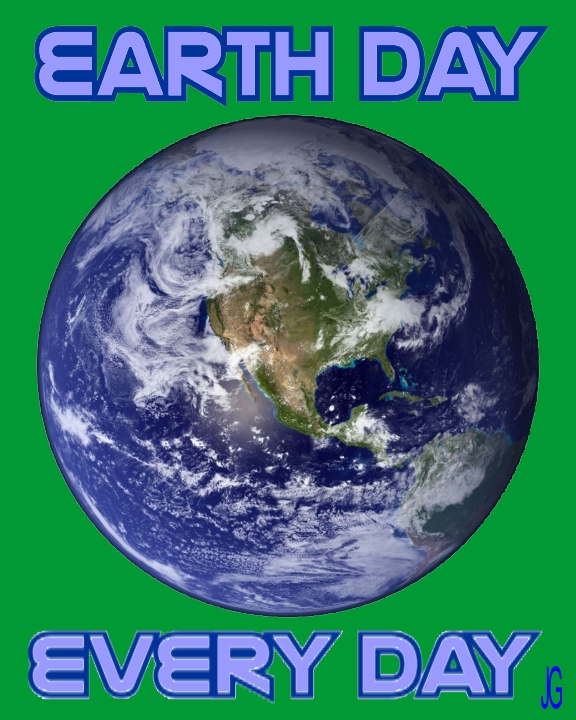 This year's East Orange Earth Day celebration theme (at least from the East Orange Tea Party), is the merging of cultures and plants from Europe, Africa, and Native Americans. We have chosen Watermelons from Africa and Crookneck Squash, native to America. 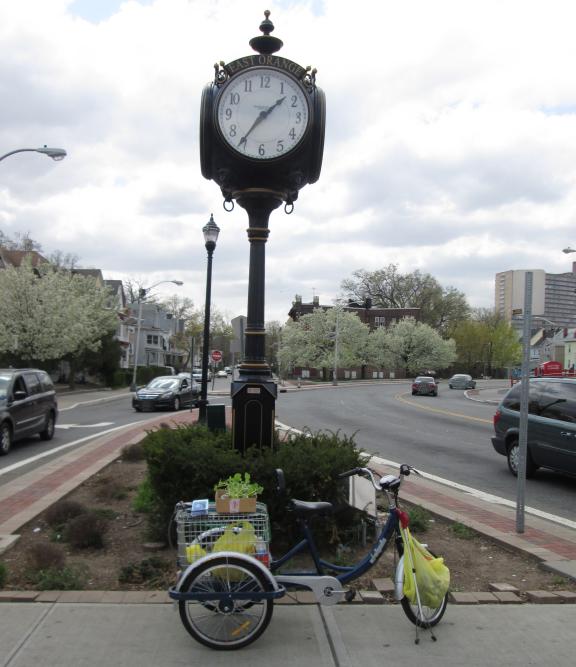 I arrived at the Clock Garden at 1:00 PM, and after a half hour or so of work, I stopped for a break and took these photos. I had collected two bags of litter from just this one small space. No one offered to help, so I gave away no brochures and no watermelon or crookneck squash plants. I'll give those away later to high school students and others who are starting home gardens. We have a few such gardeners in our neighborhood trying to fight back against city blight and neglect. 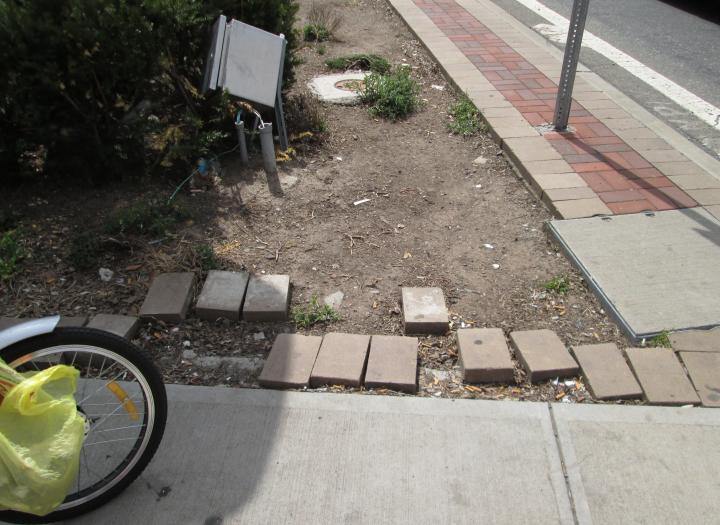 In addition to all the litter, I found that many of the the paving blocks had been moved out of place from the edge of the garden (before photo above). I didn't have the proper tools to scrape out the ground and tamp them down, but I did manage to get them back into place, although I don't bend over as well as I used to. The city needs to send out someone to do a proper job, and one of the paving blocks is completely missing, so whomever gets the assignment should bring along an extra block. There is a damaged electrical box showing in the photo, and that should be taken care of by an electrician.

There is a Star Ledger Newspaper vendor that stands on this spot in the mornings, and I am guessing that much of the debris is left by that person. The city needs to make a deal with the Star Ledger to get the vendor to clean up the spot during waiting times instead of adding to the litter. That person could also report things like the damaged paving blocks and electrical box since no one from the city seems to notice these things.

One last thing- the Chrysanthemum plants (Mums) that looked so beautiful last Autumn, are now covered with scraggly dried stems, but waiting underneath are green sprouts on next year's flowers. The brush needs to be cleared away so the flowers can re-emerge and be ready for late August, early September to show up all over again. This is true not just in the Clock Garden, but in the medians all up and down Central Avenue.

Watermelon is thought to have originated in southern Africa, where it is found growing wild. It reaches maximum genetic diversity there, with sweet, bland and bitter forms. In the 19th century, Alphonse de Candolle claimed the watermelon was indigenous to tropical Africa. Evidence of its cultivation in the Nile Valley was found from the second millennium BC. Watermelon seeds have been found at Twelfth Dynasty sites and in the tomb of Pharaoh Tutankhamun. Watermelon is also mentioned in the Bible as a food eaten by the ancient Israelites while they were in bondage in Egypt. African farmers have long used the watermelon to help them survive droughts and live in dry, arid regions of that continent. 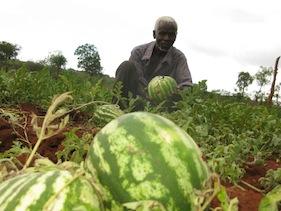 By the 10th century, watermelons were being cultivated in China, which is today the world's single largest watermelon producer. By the 13th century, Muslim invaders had introduced the fruit to Europe. According to John Mariani's Dictionary of American Food and Drink, "watermelon" made its first appearance as a word in an English dictionary in 1615.

Watermelons were being grown by Native Americans in the 16th century. Early French explorers found the fruit being cultivated in the Mississippi Valley. Many sources list the watermelon as being introduced in Massachusetts as early as 1629. Southern food historian John Egerton has said he believes African slaves helped introduce the watermelon to the United States.

Tips for growing your Earth Day watermelon seedlings:
• Watermelons grow best in well-drained soil with a pH of 6.0 to 6.8.
• Form planting mounds about 3 in. tall and 12 in. to 18 in. wide to improve drainage.
• To direct seed with your Heritage seeds from this year's watermelons next year, plant two seeds 1 in. deep in each mound and thin to one plant after they have at least two leaves.
• Improve growth by controlling weeds with cultivation, which also helps aerate roots

If you’re wondering what you’d have to push out of your garden to make room for watermelons, don’t despair. All you need to do is train your watermelons to climb. As the vines, which should be about two feet apart, begin to run, send them up a sturdy trellis. You will need to tie the runners to the trellis, since watermelons are not natural climbers.

Once the plants set fruit, support the burgeoning melons with slings, which can be made with cheesecloth, nylon stockings, or old T-shirts. If the sling completely covers the fruit, it provides protection from insects. In addition to saving space, trellising improves air circulation and helps prevent watermelon plant disease. 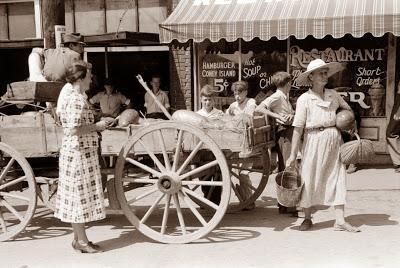 How to tell when the watermelons are ready for harvest:

Although determining the optimum maturity of a watermelon can be difficult, the plant provides clues. First, inspect the curly tendril near where the watermelon attaches at the stem. It should be dead or brown.

Second, turn the melon on its side and inspect the belly. The underside of the watermelon should be creamy-white.

Third, thump. A ripe melon should deliver a deep, low-pitched sound. This has always been a popular way to detect ripeness, but I have found it takes a lot of experience to truly tell the right sound.

And finally, if you’ll notice, watermelons have a shiny, bright green color on the outside as they grow. When the watermelon matures, this coloring will dull. 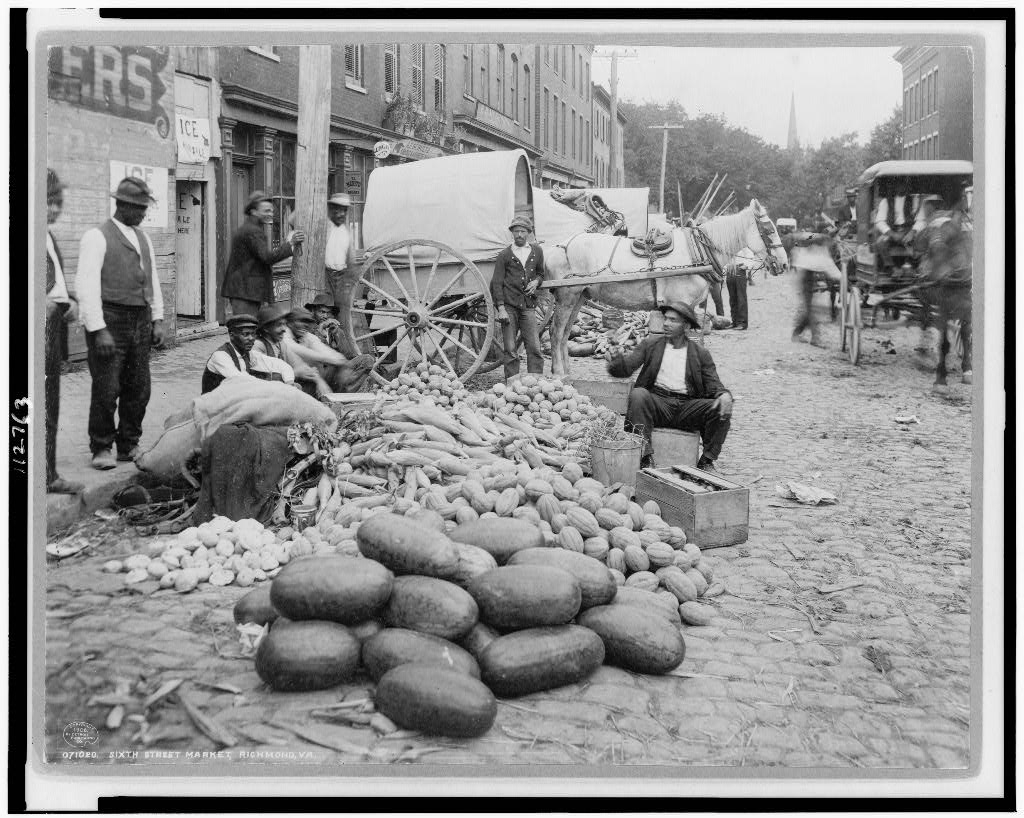 The English word "squash" derives from askutasquash (a green thing eaten raw), a word from the Narragansett language, which was documented by Roger Williams, the founder of Rhode Island, in his 1643 publication A Key Into the Language of America.

Our Summer Crookneck Squash of today, named as a variety in seed catalogues as early as 1828, appears to be the same as a squash described by Champlain in 1605 that he saw growing in Native American gardens inside and outside their villages. 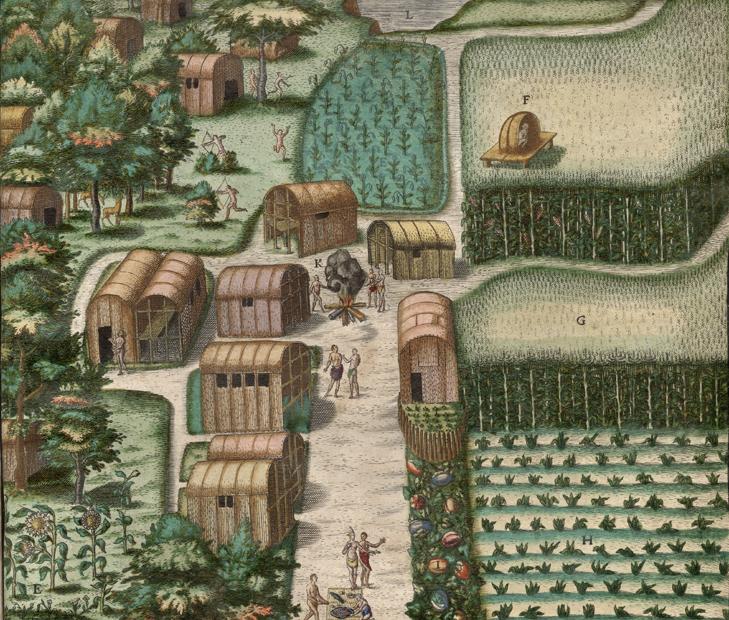 This engraving by Theodor de Bry depicting the Native American town of Secota was first published in 1588.
It was made from an even earlier watercolor drawing,"Indian Village of Secoton", by John White, created circa 1585-1586.
Secotan was probably located on the south side of the Pamlico River, perhaps near the present day Bonnerton, North Carolina

Yellow crookneck squash takes 58 days to mature and is commonly harvested when it attains a length of six inches.Yellow crookneck squash can be baked, steamed and can be stir-fried. It can also be used in soups and needs to be consumed about a week or so after picking. It is mainly cooked as a vegetable dish and can be mixed with other vegetables. Harvest the seeds before cooking the squash and you will be able to grow them to get squash again next year.

This is perhaps as good a place as any to point out that neither squash nor pumpkin will cross-pollinate either watermelon or muskmelon. Growing squash or pumpkins near melons will not affect the quality of the melons, despite the persistent belief that it will make the melons taste like pumpkins. Bad weather, poor soil, or disease may make melons taste bad, but it is not due to crossing of squash or pumpkins with melons.

The seedlings we are giving away on Earth Day are grown from Heritage seeds from Heirloom Solutions. For those who don't know what a Heritage seed is, you need to know that most of the fruits and vegetables you buy in modern stores are hybrids. They either have no seeds, or their seeds will not germinate and grow. Heritage seeds are taken from non-hybrid sources. If you grow a watermelon or squash from our heritage seedlings, save and dry out the seeds (before cooking in the case of the squash!) and almost every one of them will germinate and grow into a new plant next year, and on into the future. 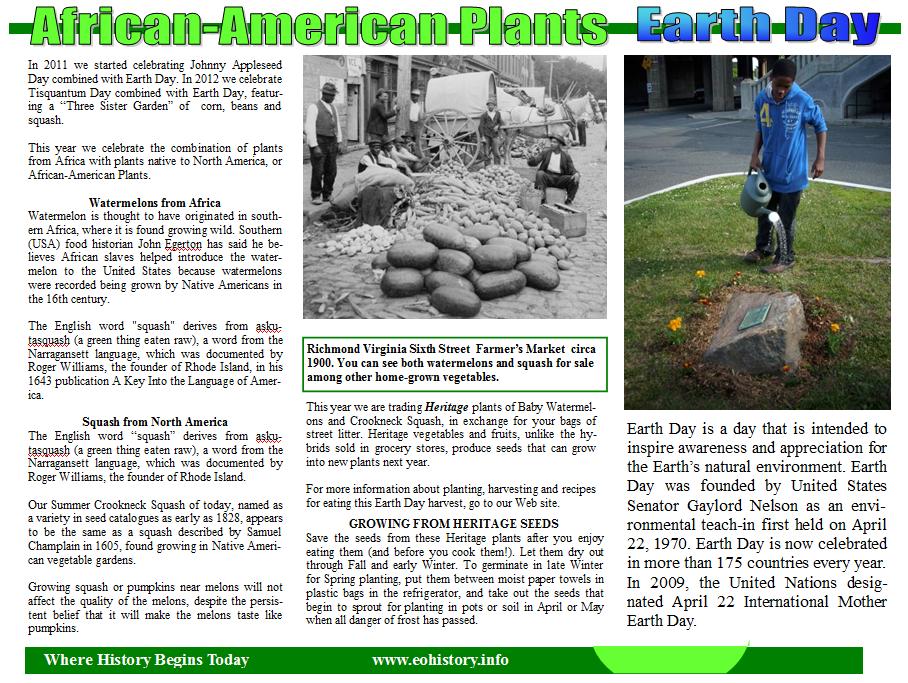 Click on the Brochure to get a printable pdf file.

Back to the East Orange Interactive Museum Home Page