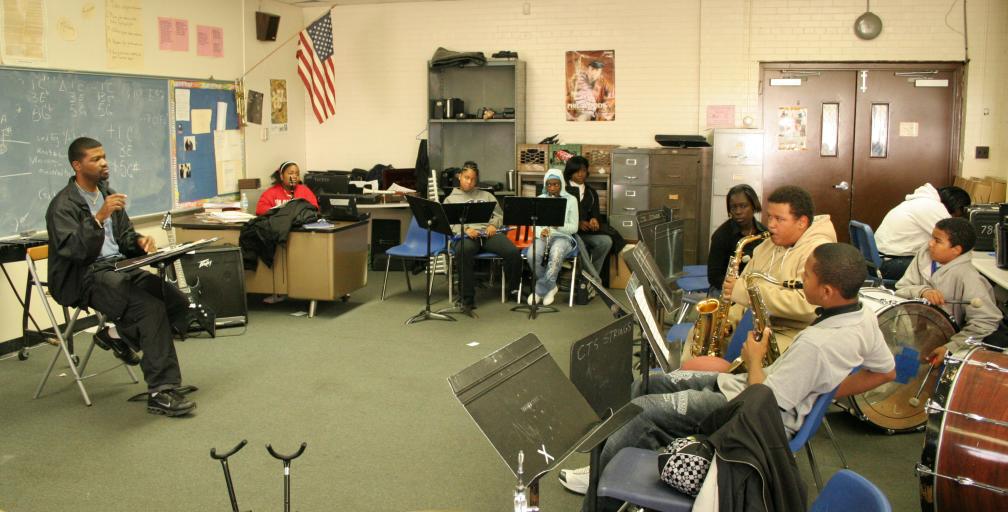 The East Orange Unified Marching Band (EOUMB) began in 2006 when Band Director Frederick Goode (far left) decided that the only way to expand his group was to include music students from other schools, elementary, middle and high schools. They met in the building that used to be known as Vernon L. Davey Junior High, but by 1995 it was being called Cicely L. Tyson School of Performing and Fine Arts serving grades 6 to 12. 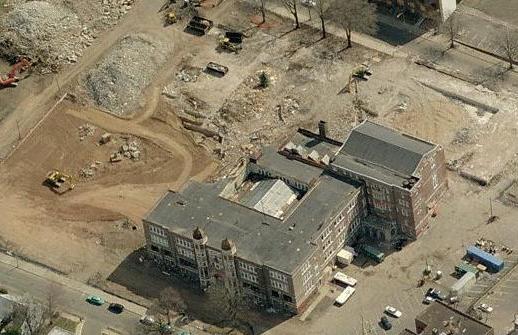 Meanwhile, in November of 2005, East Orange High School had closed and all the students moved to the new East Orange Campus High. The old EOHS was to be demolished and replaced with a new high school and elementary complex to take over the name of Cicely L. Tyson School of Performing and Fine Arts.

The newly formed EOUMB learned to march in the gym, since there was no football field or outdoor space large enough around the school building. 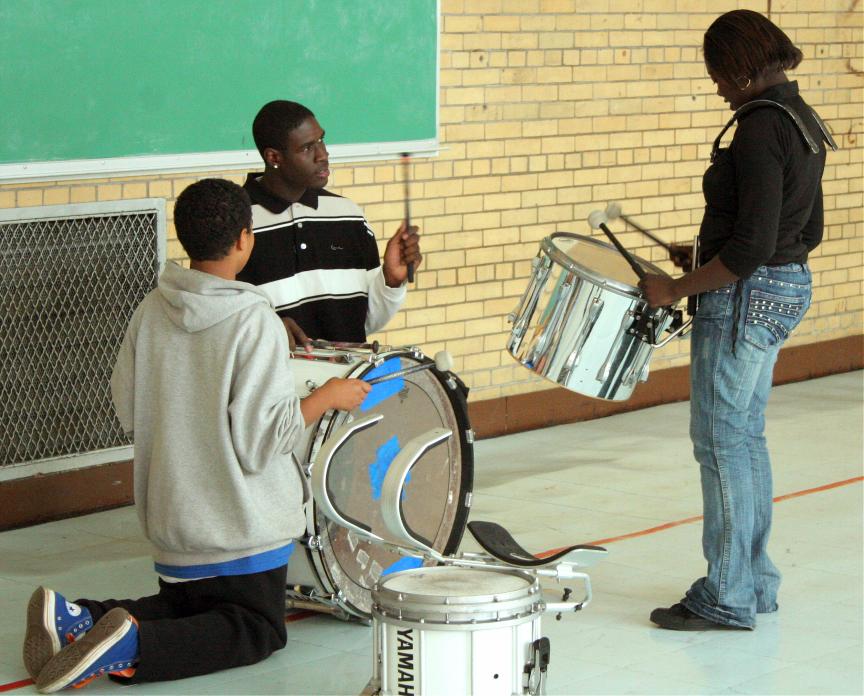 Drum practice also took place in the gym since it was far from the rest of the building and contained the noise.

The walls probably still echo from the sounds of the full band getting their start back in 2006. 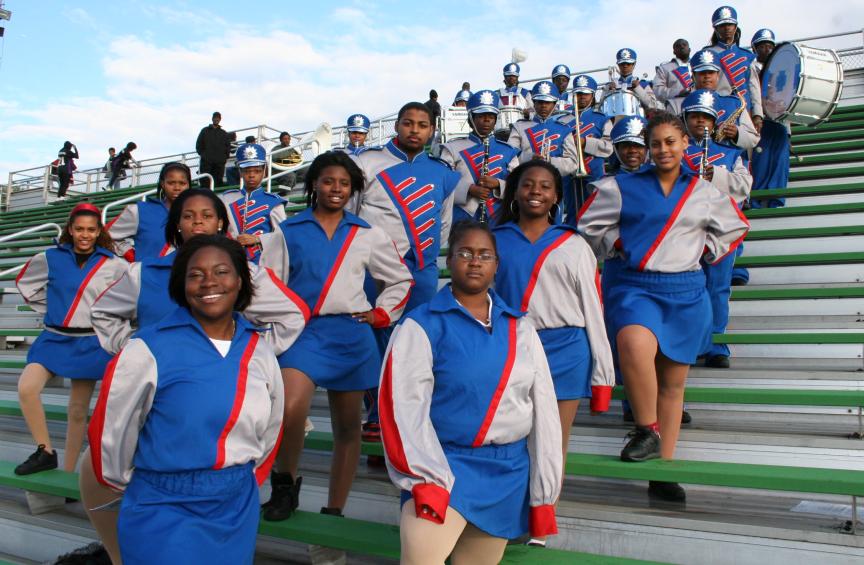 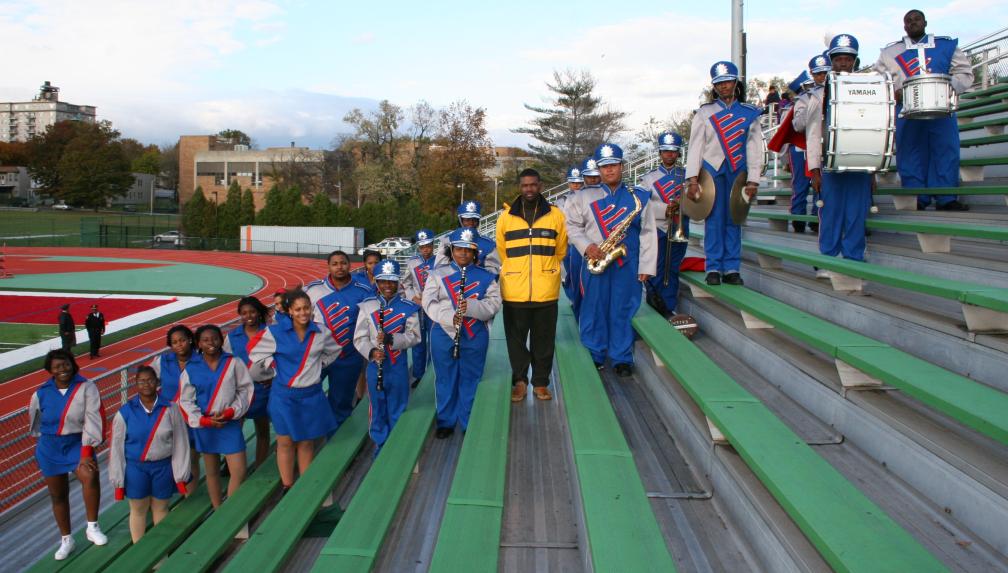 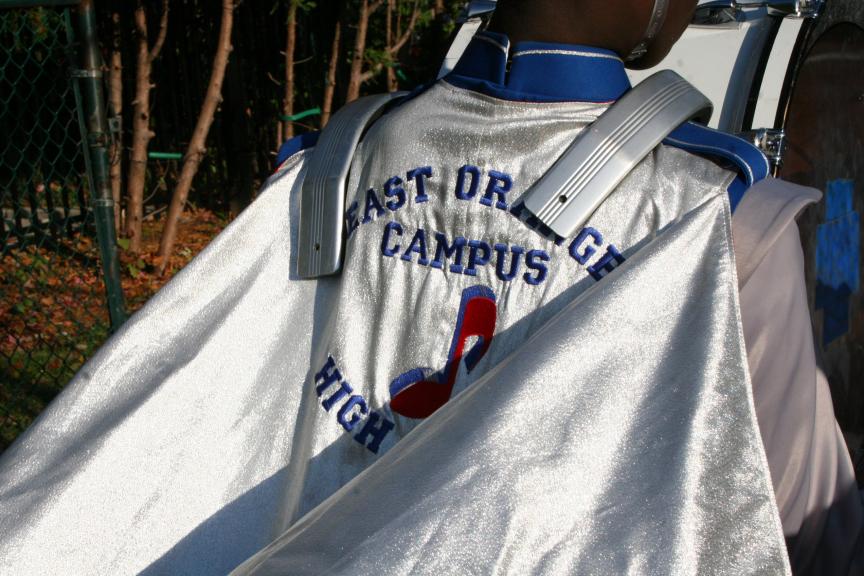 On Earth Day 2008, members of the East Orange Unified Marching Band went to the old First Church in Orange to participate in helping Jim Gerrish clean up the winter debris of the Old Burying Ground that is part of East Orange History as well as History of all the Oranges. More Photos are HERE.

A group of EOUMB students, reformed as a Jazz Ensemble, got to play sitting down for a change as the East Orange Education Foundation (EOEF) presented the Torchbearer for Education Award to The Reverend Russell White during an Award Luncheon at The Essex Manor in Bloomfield, NJ. More Photos are HERE.

A Bugle and Brass Ensemble from the East Orange Unified Marching Band played for the guests assembled at City Hall Plaza in East Orange, NJ. on Veterans' Day, Tuesday, November 11, 2008. In the background is the new Cicely Tyson School of Performing and Fine Arts which was still under construction, and which will eventually would be the new location for the Band. The Color Guard consisted of members of the Girl Scouts. More Photos are HERE.

It wasn't until the summer of 2009 that we began to see how important it was to keep a record of the Band and its accomplishments and began making regular entries about the EOUMB on the current Band Parents' Web Page. 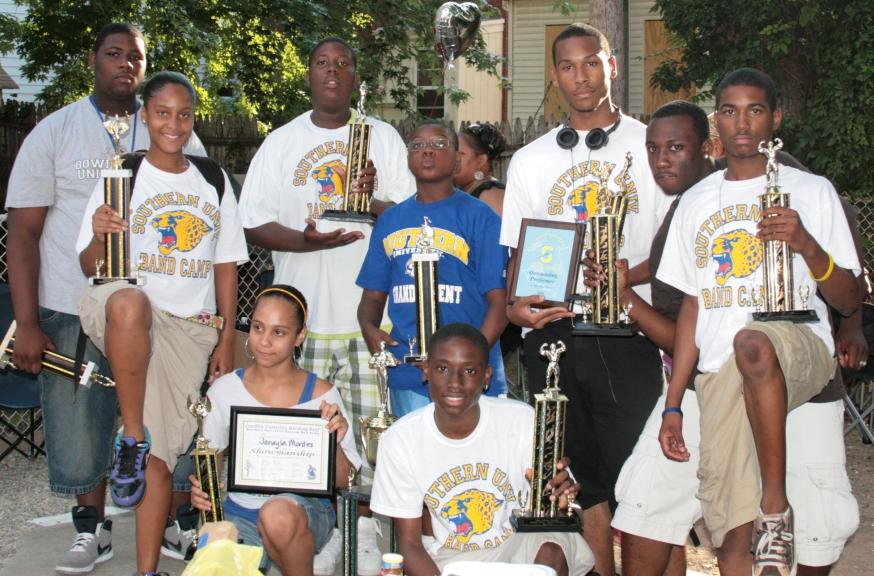 The summer began with 10 students traveling with Mr. Goode to Southern University for a session with a real college band. More Photos HERE. 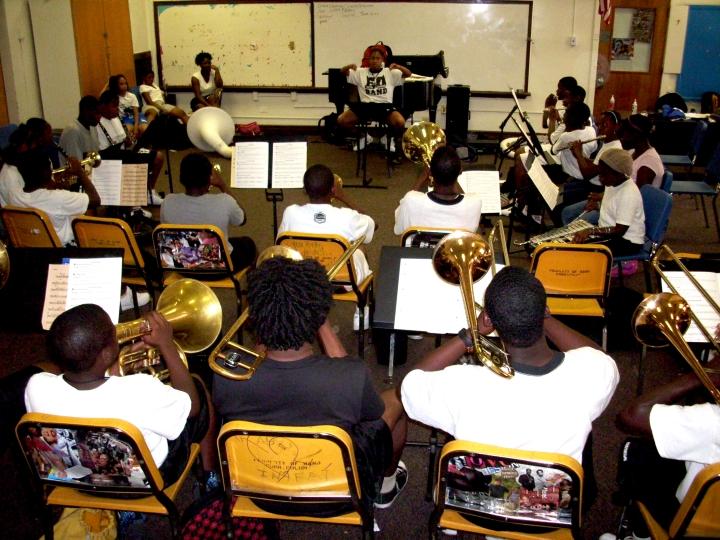 By 2009, and now officially known as the East Orange Unified Marching Band* and wearing summer uniforms with the logo emblazoned on it (see conductor Bria Douglas above) we can see that the idea worked. The number of musicians has increased and the policy of getting the students more involved with running their own band is one of the reasons why. 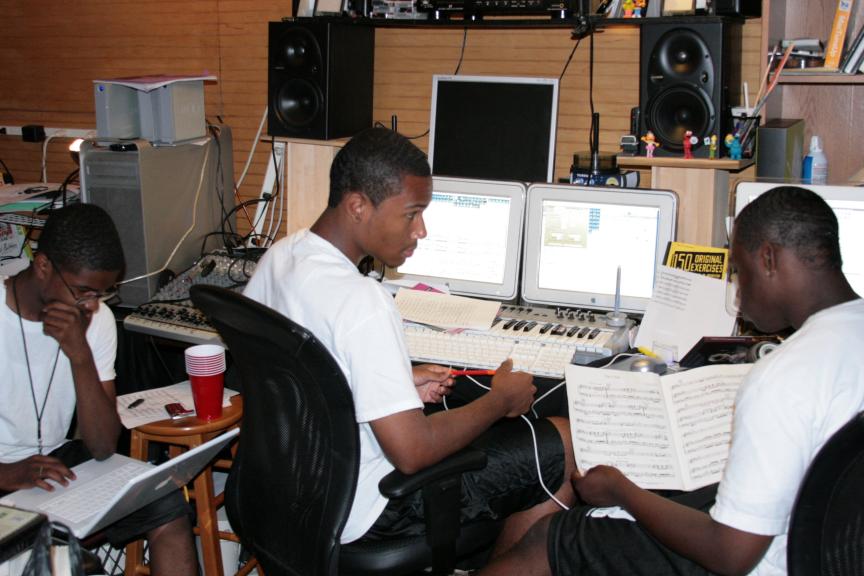 Students were learning to write their own music using the latest computer technology, which also prepared them for college and future careers in music. You can learn more details of the Band in 2009 by jumping to their own Web Pages. This is the last year the students would be at the old VLD building on Elmwood Avenue. In the Fall of 2009 they entered the newly constructed Cicely L. Tyson building. 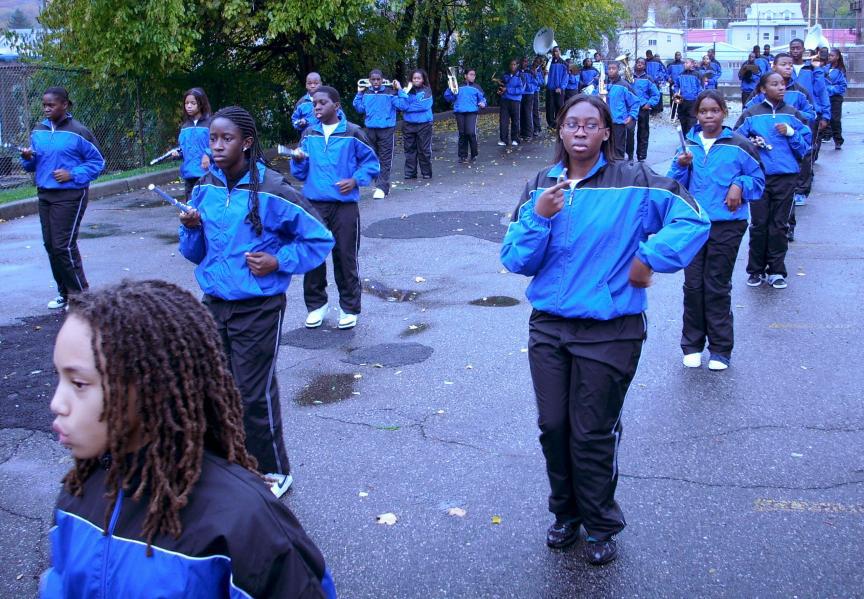 New uniforms had been ordered, but until they arrived, the Band dressed in their new colors of blue and black exercise outfits that they bought themselves from money they collected from fund raising events. More Photos HERE.

The new uniforms arrived just two days before the big Thanksgiving Game for 2009. The section leaders have the red feather plumes. 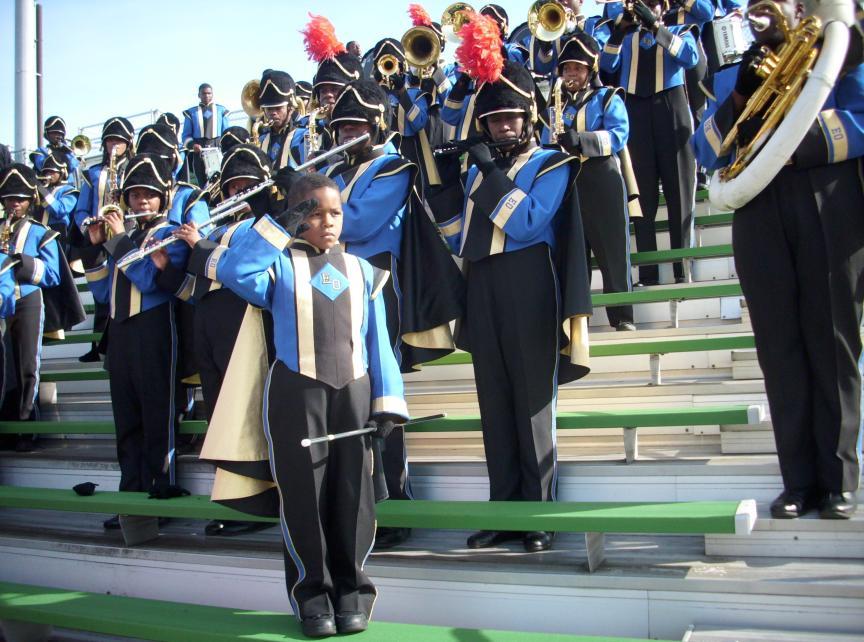 This was the year the Band had three drum majors, Lloyd Tomlinson, Allan Theodore, and Bria Douglas. But they also had a fourth "mascot" Drum Major in Naji Cherry, shown above giving the hand salute during the playing of the National Anthem at the game between Seton Hall Prep and East Orange. 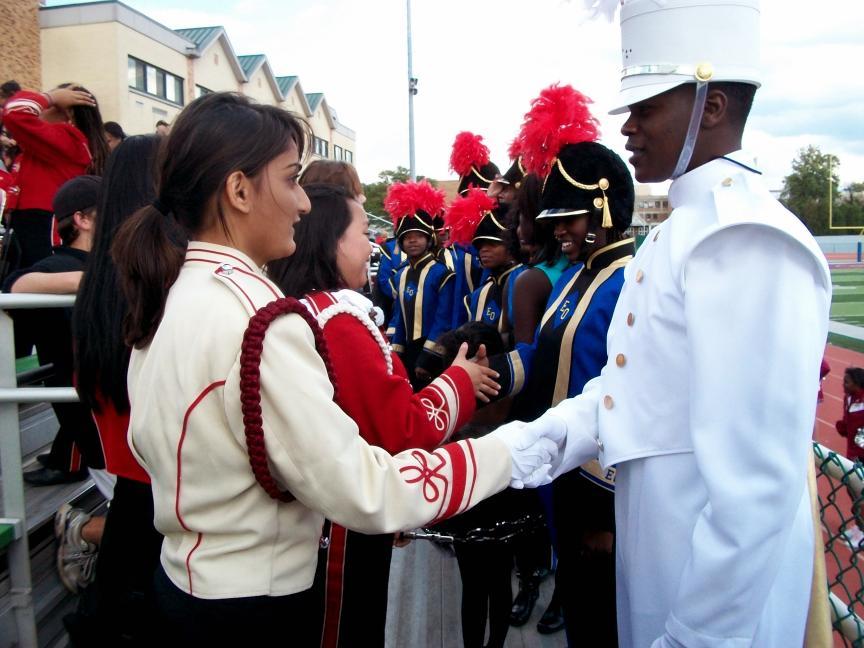 Drum Major Allan Theodore of the EOUMB shakes hands with the Drum Major of Bloomfield High.

The above photo shows a "Band Moment" that was an important "life skill" taught by the Band, more important than music or marching - human harmony. The Band Section Leaders always tried to take time during the game to meet with their counterparts from the "rival" Band to forge new friendships and alliances between bands. The above example took place at the Game between Bloomfield High School and East Orange Campus High. 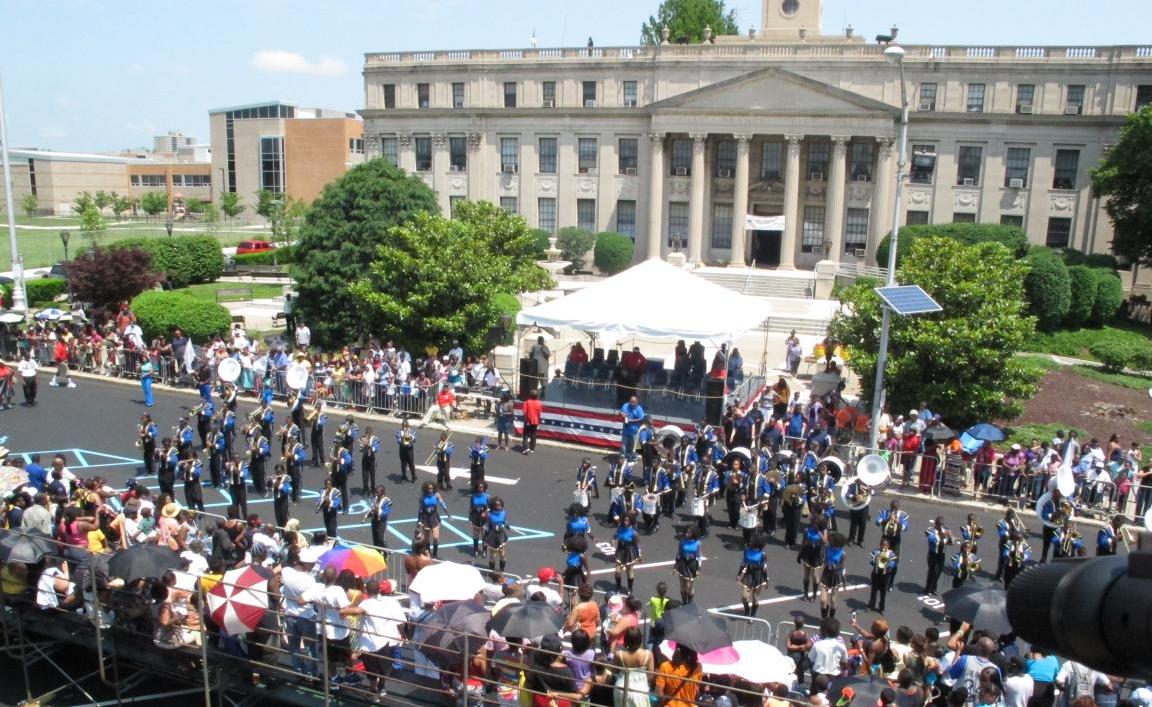 On this Memorial Day, 2012, our Band turns their backs on the "dignitaries" in the grandstand and plays for the veterans and their families and the ordinary taxpayers of East Orange who seldom get recognized for their support of the Band. 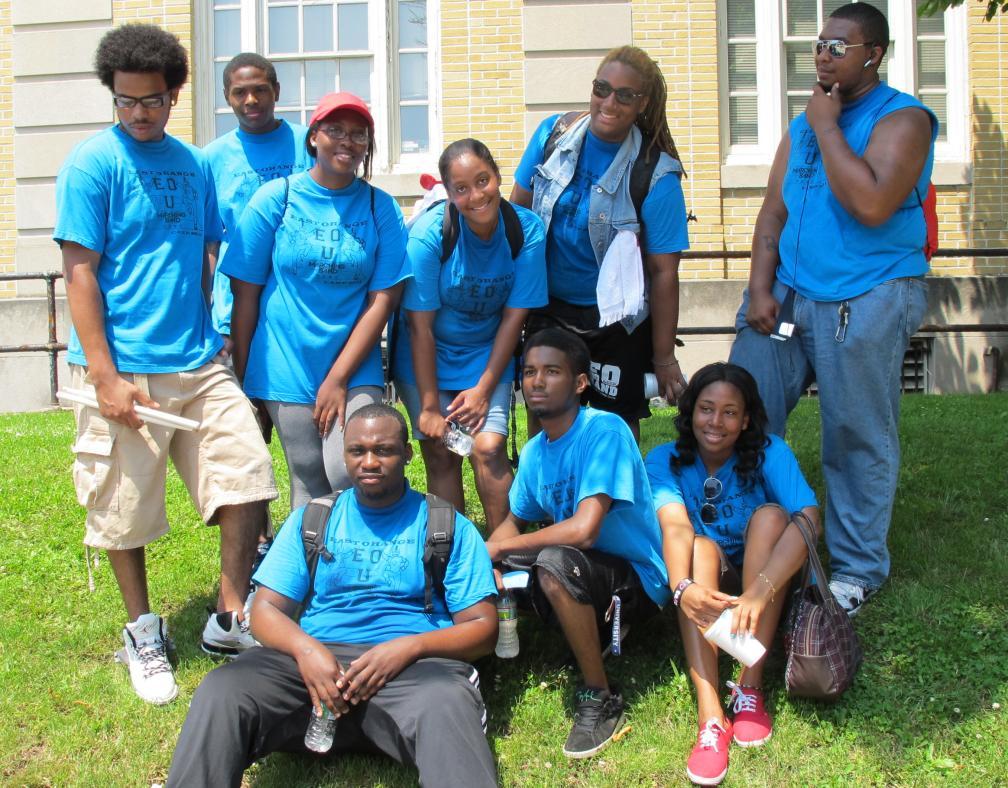 We also acknowledge our "Treasured Alumni" from 2012, who always managed to make it back to East Orange to help out their Band on special occasions like the annual Memorial Day Parade. 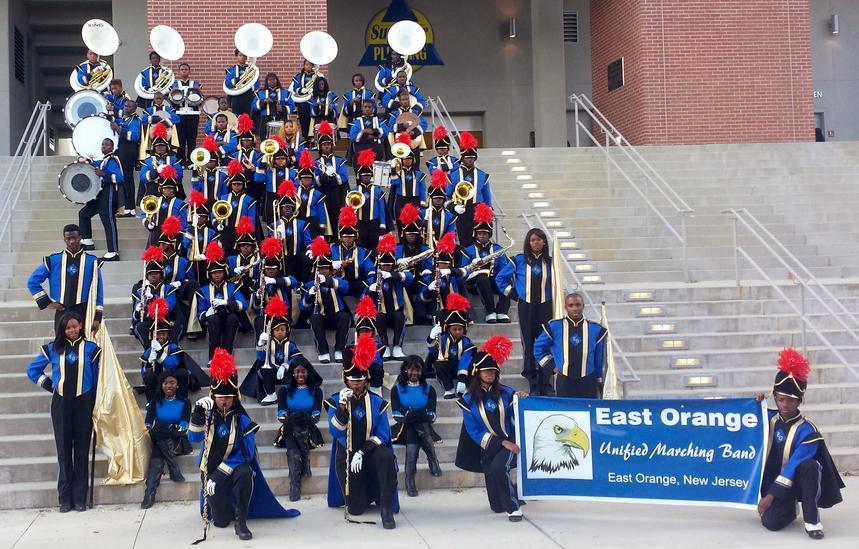 The Band was invited to participate in the 2013 National High Stepping Championship held in Atlanta, Georgia.

Independence Day, 2014, the Band performed at Paul Robeson Stadium for the taxpayers of East Orange.

The Band's performance in Philadelphia at the 76er's Game will stay in their memories for their lifetimes.

Alumni from the Summer of 2015 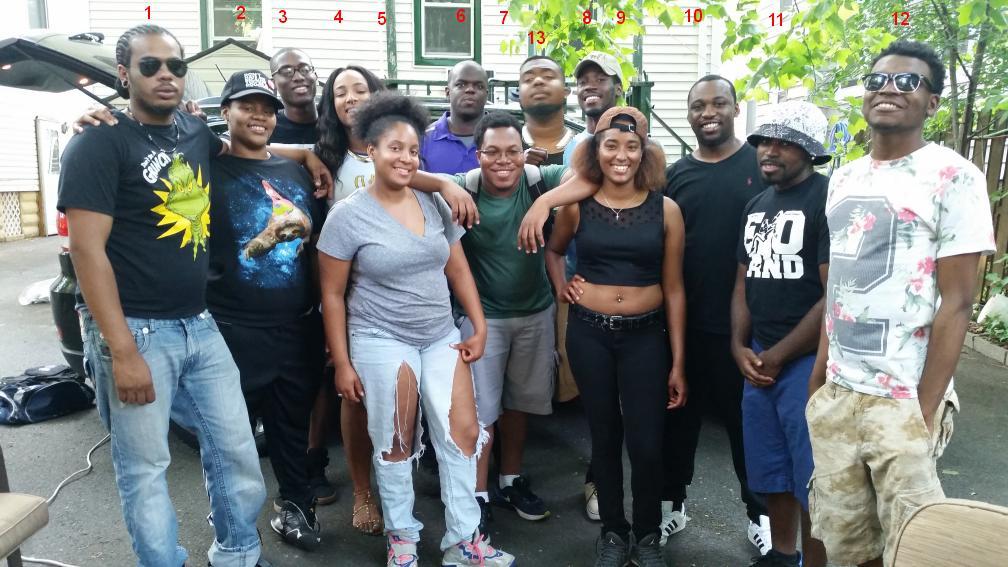 This was taken at the Memorial Day (5/25/15) "After Party" Backyard Barbecue hosted by Ms Saez and Band Director Frederick Goode. 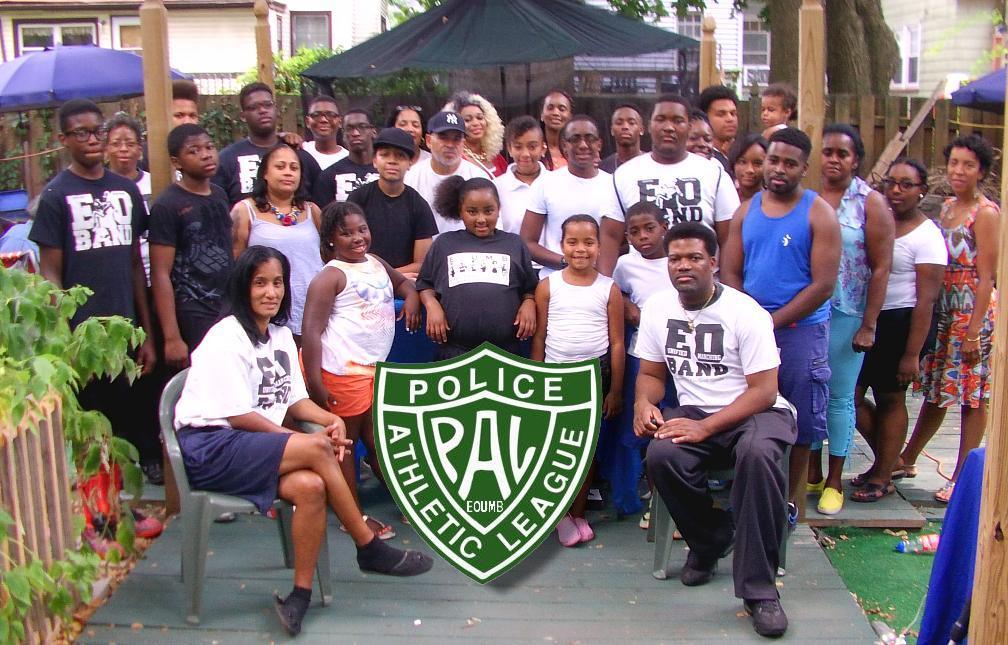 On August 29th, 2015, a formal re-organization meeting was held on Mr. Goode's backyard patio for students and parents who agreed to take their Band out of the control of the East Orange public school district and the Board of Education, and combine with the East Orange Police Athletic League. At the end of the meeting, the organizing members who signed Police Athletic League applications to be a part of the PAL - East Orange Unified Marching Band into the future, posed for this historic photo to remember the occasion. This is the start of a new era. The Band is back to the beginning, with no instruments, no uniforms, no music, and no place to practice. Whether Mr. Goode and Ms Saez can re-form the Band all over again remains as a challenge for the future. This is the place to watch that unfold.

Back to the Interactive Timeline

* Note: The name "East Orange Unified Marching Band" is registered with the State of New Jersey as the property of Frederick Goode, as is "EOUMB" and "E.O.U.M.B."